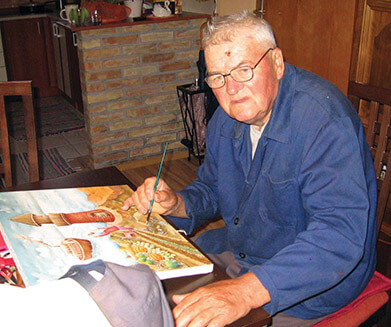 Michal Povolny was born on March 10, 1935 in Padina. He finished five grades of the elementary school to eventually become a farmer.

Michal’s talent for drawing was first noticed after he left school, though it was only after 1958 that he became more dedicated to painting. At first, he would copy other painters’ work, though started creating original paintings from 1964.

He had his first exhibition in Kovačica in 1970, also being part of the ‘October in Kovačica’ exhibitions from 1971, and being one of the founders of the ‘School of Kovačica’ in Padina.

Michal’s paintings often feature his birthplace, depicted in warm, yellow-brown colors. The ruins of old windmills are particularly recognizable in his paintings, which nostalgically resemble the period when the people of Vojvodina earned a living that way. Nowadays the windmills are unused, without sails or grindstones to mill the grain. His paintings also often feature serene winter scenes.

Michal has participated in numerous collective exhibitions in our country and abroad, including cities such as Tel Aviv, Rome, Dusseldorf, Jerusalem, and Amsterdam among others.

Michal Povolny passed away on December 8th, 2021 and he was buried at the cemetery in his born village Padina.

Michal Povolny's artworks in the fund of Gallery of naive art: