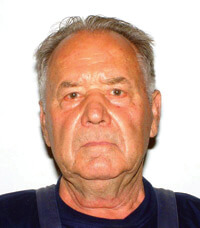 He was born in Kovačica. He finished five grades of elementary school. Until the Second World War, he was a servant to wealthy peasants, and after the occupation, he was taken to forced labor in a village inhabited mainly by Danubian Germans. In 1944, he joined the People’s Liberation Army, where he earned a medal for bravery.

After the war, he completed a six-month masonry course in Kovačica, and later two grades of high school in masonry, and thus obtained the diploma of construction manager. He worked in various construction companies, and also as an independent master mason.

He discovered his talent during his military service, he painted wall company newspapers.
An exhibition organized by his neighbors in 1952 left a strong impression on him. Then he decided to start painting more seriously himself.
He searched for his own expression for a long time. He often tried to imitate educated painters and thus approached the city amateurs of non-independent expression. However, he managed to overcome this way of working and create original work.
In addition to the usual rural themes, he painted portraits, but also scenes from the Second World War. The figures of the paintings seem to be stiff, and their faces are portrayed.

Jan Strakušek's artworks in the fund of Gallery of naive art: