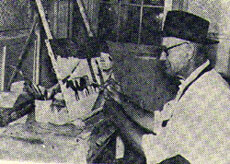 His education includes 5 years of elementary school in his birthplace, Kovačica. He lived as a farmer and started painting when he was twelve years old. He started off making pastels, then watercolor paintings, and finally from 1839, he took the advice of Martin Paluška and started making oil paintings.

Sokol was redrawing reproductions of less-known European painters. The motives that interested him, like gondolas, castles, wild animals, and so on, were non-existant in Banat. His first original painting was „Kovačicka cirkev“ or „Church of Kovačica“ which he painted in 1947.

He was a part of collective exhibitions in London,  Sao Paulo, Rome, Amsterdam, New York, Rotterdam, Florence, Venice, Vienna, Kaltaniseteu. From 1952 to 1982 he was a part of every „Kovačicki oktober“ event.

Jan Sokol's artworks in the fund of Gallery of naive art: