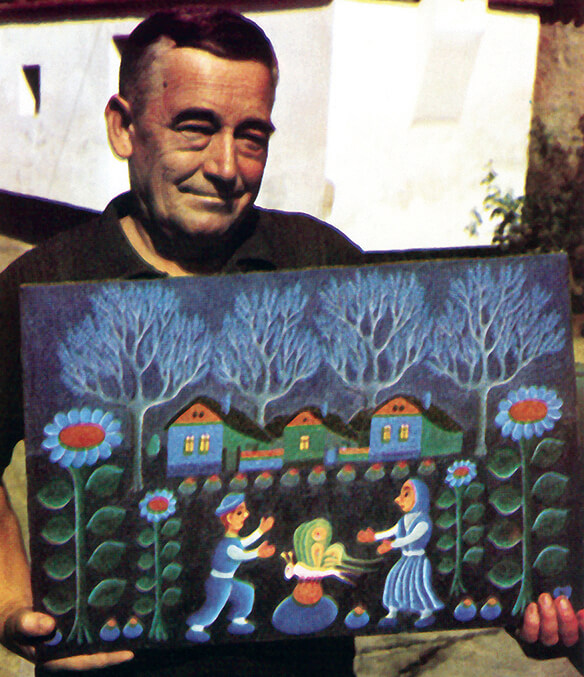 He was born on June 18 in 1925. in a farming family in Kovacica. His particular interest in painting he
showed in early childhood. His talent was noticed in the army when he was arranging wallpapers. After
returning from the army he continues to paint and with painters Jan Sokol, Martin Paluška, Vladimir
Boboš and Michal Bireš established the painting section Pokrok in Kovačica. Thus was born the famous
“Kovačica school” of naive painting in Kovačica which was later joined by Martin Jonaš and Zuzana
Chalupova.

He had a rich artistic life, his paintings are in major museum and private collections even in the Vatican
The museum, he was the only Slovak whose painting was exhibited in the Louvre, His painting “Children’s
Dance” was reproduced in 1974 on the Post stamp of Yugoslavia.
Critics have included him among the world’s most original painters of naive art.
His life’s motto was thought of Exuperyís Little Prince, that ” the man sees well only with his heart”, and
the heart was his signature on the paintings.
He died in 1985, yet his big heart is still beating in his paintings.

Jan Knjazovic's artworks in the fund of Gallery of naive art: