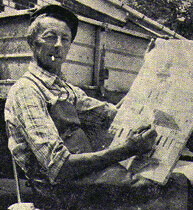 He finished four grades of elementary school. He lived from agriculture until the end of his life.

He made his first painting steps in the army in a wall newspaper. He was a lover of nature and horses were the first and most common motif in his paintings. In his 830 paintings, he faithfully preserved the folklore elements and solemn moments of the village collective.

He exhibited at the Kovačički October, since he started painting (1954-1985). The most valuable recognition was awarded to him by MK SSRNV in Kovačica, on the occasion of the 30th Kovačica October – Silver Plaque.

Jan Venjarski's artworks in the fund of Gallery of naive art: