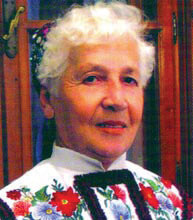 Alžbeta Čižik was born on April 4, 1936 in Kovačica. She graduated from an administrative high school.

Alžbeta belongs to the first generation of naïve painters in Yugoslavia and was one of the founders of the Gallery of Naïve Art in her birth city.

Alžbeta depicts everyday country life with warmth and sincerity. Through her work, she represents the tradition and customs of her life and community. Her paintings present nascent cheerful juvenility and romantic, idealized homeland landscapes. She shows great skill in drawing, though also works with graphics, using materials such as aquarelle and pastel. For that reason, her paintings are a synthesis of drawing and rich color depicting harmony and poetic serenity.

Alžbeta Čižik's artworks in the fund of The Gallery of Naive Art: