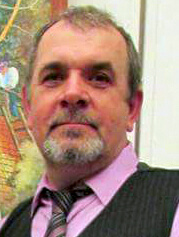 Juraj Lavroš was born on June 27, 1963, in Padina and he attended the primary school in his hometown. Since he was a child, he has shown a talent for painting. His paintings were well-accepted by the audience from the very start.

His landscapes are dominated by a fruitful plain with bare trees, extraordinary plants, and few houses and wells, which are the symbols of Padina. However, his favorite motif is a mischievous gander which is, according to art historians, a sign of purity of his soul. Most often Juraj expresses his vivid imagination on oil on canvas.

Juraj Lavroš became a member of the Gallery of Naïve Art in 1994, the year when he had his first individual exhibition in Padina. He participated in more than 70 collective exhibitions in Serbia and abroad (Montreal, Mexico City, Munich, Berlin, Bonn, all around the Slovak Republic, etc.) and he had six individual exhibitions (in Padina, Kovačica, Kopaonik, Cyprus, Bratislava).

Juraj Lavroš's artworks in the fund of Gallery of naive art: